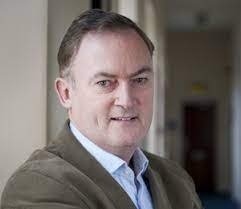 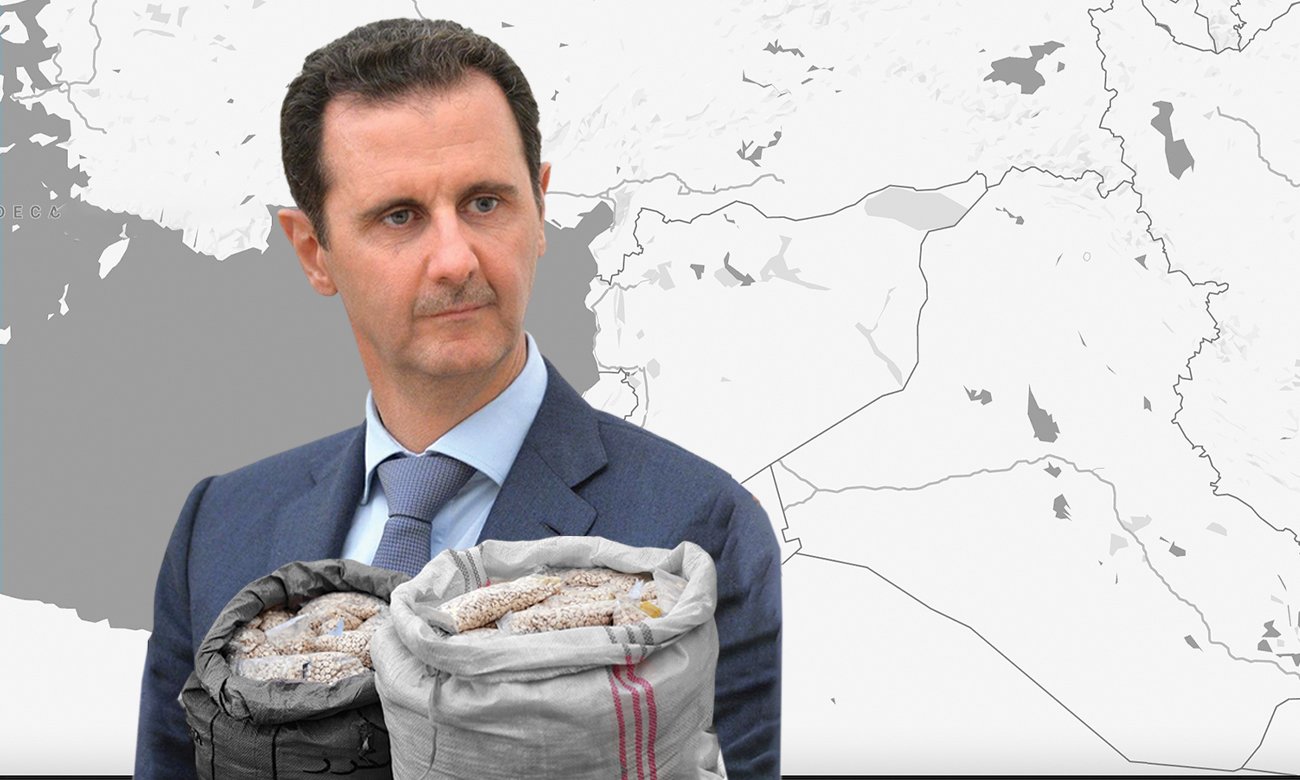 The late Columbian drug cartel boss Pablo Escobar, who amassed extraordinary wealth and power, would have longed — even at the height of his career — for the impunity with which Bashar Al-Assad has been pursuing his multi-billion-dollar Captagon business. Captagon is a highly addictive amphetamine that is also called “the poor man’s Cocaine.” Despite the power that Escobar possessed, the state was continuously attempting — with varying degrees of intensity and sometimes at great cost — to bring him to justice. According to Joel Rayburn, a former U.S. special envoy to Syria, the Assad regime IS “the drug cartel.”  This is supported by the current near avalanche of reports, research papers, articles and analyses linking the Assad regime to the Captagon trade. The research institutes and media organizations conducting this work include the New York Times, the Newlines Institute, Der Spiegel, Radio France International and the Center for Operational Analysis and Research.

The growth of the Captagon market has been truly astonishing. It is interesting how some media reports tend to extrapolate the total value of the Captagon market in a given year from the number of drug busts and seizures that took place. I recently asked a leading researcher about this and was told that it was difficult to speculate the market value of the Captagon trade because the government itself, i.e., the Assad regime, as the de facto manufacturer and distributor, is the drug cartel. As a result, no official figures can be found. Nonetheless, Charles Lister, one of the world’s leading experts on Syria, had no such problem. When he spoke to two organized crime experts, he found out that based on the number of total seizures in 2020 ($3.5 billion) the Captagon trade was worth at least $17.5 billion, twenty-two times Syria’s official number for official exports of $800 million. The experts extrapolated this number by multiplying the number of seizures by five.

Similarly in 2021, the total seizures of Captagon amounted to $6 billion in street value implying that its real market value is $30 billion, an explosive growth. This represents a significant escalation of the drug problem in the Middle East especially in countries like Saudi Arabia where narcotics are very popular. Meanwhile, the Jordanian authorities reported that they seized the same amount of drugs in the first quarter as they did during all of last year. This is another alarming indicator of the burgeoning drug crisis considering that Jordan is both a market for Captagon and the main trans-shipment country.

Given the overwhelming evidence that Assad has turned Syria into a narco-state, one is forced to ask why there has been such little effort by the EU and the US to expose him and more importantly to seek to end Syria’s role as one of the biggest contributors to human suffering and instability — especially in the Middle East. For example, the United States who is legally obliged under its own domestic legislation to call out narco-states and who passed the Caesar Act — to impose severe sanctions on the Syrian regime, end Assad’s reign of terror and hold him accountable — has done nothing to address the burgeoning drug trade in Syria. Meanwhile, Charles Lister highlights that the State Department — in an assessment of Assad and his family’s wealth —has made no reference to their involvement in the Captagon business, which is generating billions annually. Indeed, it is troubling to know of the lengths that the Biden administration appears to go to in order to conceal the size of the trade of Captagon and other illegal drugs that are being produced in Syria under the Assad regime. In 2021, the US administration lobbied very hard to prevent an amendment to the National Defense Authorization Act for 2022 that would have required the United States to develop a strategy to combat Syria’s Captagon industry. The State Department is, on the one hand, excluding from its report the massive boost in Assad’s wealth from the manufacturing and export of illegal narcotics — potentially running into the billions — and on the other, is lobbying to prevent itself from being liable by Congress for not preventing one of the most rapidly developing illegal narcotics businesses in the world. The growing drug problem in Syria and across the Middle East is destabilizing the region and causing much human suffering.

However, pressure is mounting on the Biden administration in the Congress to address the challenge posed by Assad’s narco-state. On July 22nd, Lead Republican of the House Foreign Affairs Committee, Michael McCaul, and the ranking member of the Senate Foreign Relations Committee, James Risch, wrote to Secretary of State, Antony Blinken, regarding the State Department’s failure to properly address “the estimated net wealth and sources of income of Syrian President Bashar Assad” and how it “failed to account for the role of the Assad regime in Captagon trafficking in the Middle East”. The letter demands that the State Department, which is obliged under the National Defense Authorization Act to act, to do so. Based on revelations by major media outlets and research institutes mentioned above the State Department appears to have failed to act on the Captagon trafficking.

It is important to stress that there is bi-partisan support in the US Congress to pursue Assad over Captagon and an understanding that he is potentially one of the world’s richest “cartel bosses,” though in his case — as noted — his regime IS the cartel! On July 15, three Congress members wrote to Secretary Blinken asking him to declare the Assad regime a narco-state under the Foreign Assistance Act. Democrat Brendan Forde and Republican French Hill, both members of the House of Representatives, and Republican Senator Roger Marshall asked Blinken to determine if under that legislation Syria meets the criteria of  “a major illicit drug producing country” or “a major illicit drug-transit country.” Under the Foreign Assistance Act, the President must report to Congress before the 15th of September of each year the names of all countries that have been determined to be major illicit drug producers or drug-transit countries. They noted in their letter that in the latest report Syria was not mentioned! Will President Biden confirm in the next report, which is due shortly, that Syria is a narco-state?

The Biden administration has a very troubling record on Syria and when you look at the figures of the explosively growing Captagon trade, the US policy is nothing but a normalization of the Assad regime. By refusing to acknowledge Captagon as an emerging drug crisis in the Middle East, the US administration is also avoiding taking action on it. However, with pressure mounting in Congress, President Biden will find it harder to continue to cover up the scale of Assad’s involvement in the international illegal narcotics business.

One of the leading international experts on Captagon, Caroline Rose of the New Line Institute, recently revealed that as Kuwaiti law enforcement officers were making a major Captagon drug bust at the country’s international airport, representatives of Assad’s regime were sitting down at the table during an Interpol strategy meeting in Kuwait / UAE that was addressing the challenge posed by Captagon and how to co-ordinate law enforcement efforts to end the egregious trade. Allowing representatives of the Assad regime, the biggest producer and distributor of Captagon, to gain invaluable intelligence about international police efforts to stop Syria’s increasingly valuable drug business is an indictment against Interpol. Interpol’s indefensible decision to allow Syria to rejoin the international policing organization beggars belief. Every member of the organization is effectively complicit in that decision, especially major EU states and the US who have the power to prevent this scandal.

This scandal is symptomatic of how no effort has been made yet to hold the Assad regime and its allies Russia and Iran accountable for these atrocities, some of the worst committed since the Second World War. The cost of that indifference is being paid every day by civilians in Ukraine who are being slaughtered and terrorized by Putin’s commanders, who in their turn are using the war there to enhance their skills in terrorist style warfare against civilians in Syria. Western countries are emboldening Assad by not making him accountable for mass slaughter. If he is not being pursued for his war crimes why should he be worried about producing and trading in Captagon on an industrial scale? 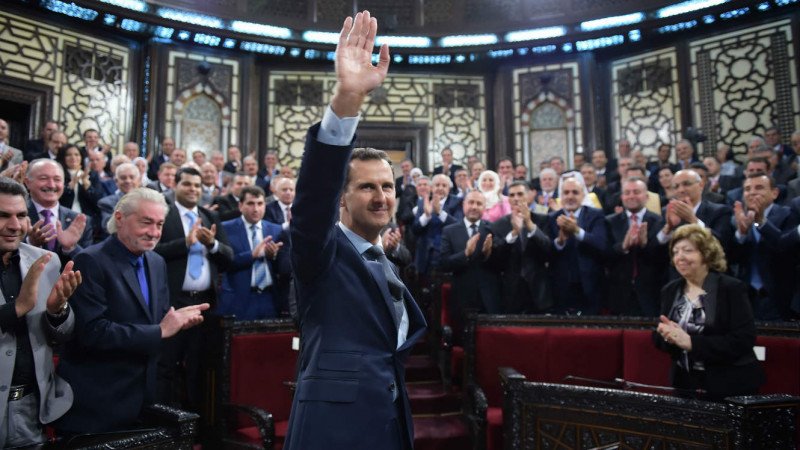 Is the Assad Regime Secular?