The Harmoon Center developed its website, making some modifications to the sections, while preserving the overall design. It also worked on setting up an English language version of the website, based on the importance of attracting new readers and researchers. In 2021, the number of visitors to the harmoon.org website reached about 493,000 visitors, the number of readings on the website was about 2,028,521, while the number of people who reached the center’s website and pages on social media was about 2,231,473.

In addition to the in-depth studies, the Center also published 248 opinion articles, and 161 short articles, all related to the Syrian issue, and conducted some 49 written interviews with a number of Syrian politicians and intellectuals. The Center continues to publish opinion articles and short studies related to Syria.

The Center produced four issues of its Kalamoon magazine, which focused on topics that have not been examined widely elsewhere, and was able to attract a large number of Syrian writers and researchers. Kalamoon magazine issues for the year 2021 were as follows:

• Issue 15 focused on the social contract in the Syrian national state.

• Issue 16 looked at Syrian feminism, in cooperation with the Musawat NGO.

• Issue 17 examined the history of Syrian theater from independence until 2020.

• Issue 18 centered mainly on the Syriac Syrians and their past and present.

The Center organized the first session of the Conference of Syrian Researchers in Social Sciences from January 15th to the 17th through social media, due to coronavirus restrictions. The sessions were held in collaboration with the Syrian Society for Social Sciences and the International Sociological Association, and with the participation of Kalamoon Magazine.

At the conference, 30 peer-reviewed research papers were presented by Syrian researchers, dealing with various topics exclusively related to Syria. The conference received great attention and follow-up from academics and followers on social media.

Harmoon held weekly seminars that discussed topics related to the ongoing conflict in Syria, as well as other topics on Arab and regional issues.

In 2021, the center organized, 99 seminars via social media in Istanbul and Doha, with some seminars having in-person audiences. Around 168 Syrians, together with a number of Arab and Turkish participants, attended these seminars. The center achieved great improvements in broadcasting, and was able to receive guests from different regions.

Over the course of the year, the Center launched a number of initiatives, workshops and programs which are listed below.

In June 2021, the Center launched the Harmoon Observatory project, with the aim of monitoring changes and developments in the political, military and security situations, and the change in the living and social conditions of Syrians in the various Syrian governorates.

Seven monthly monitoring reports were issued during the trial months from June to December. Starting from the seventh report (December 2021), the monthly reports were divided into three parts: the first includes political monitoring, and provides a monthly  assessment of the political situation in Syria; the second covers military operations and security incidents; and the third focuses on economic and social issues.

The National Dialogue Initiative on the Future of Syria

The Center launched a program for national dialogue among key Syrian figures, including academics, politicians, intellectuals, and jurists, with the aim of discussing important issues, vital to the future of the Syrian nation, and to find a common ground and reach a consensus on these issues.

The program includes 14 topics divided into two phases: seven issues were discussed in 2021, while the remaining seven will be discussed in 2022. Each issue is addressed over the course of a month, through two closed dialogue sessions, with around 20 to 25 people participating in each.

The topics covered in 2021 focused on the supreme constitutional principles, the political system, secularism /neutrality of the state, equal citizenship, transitional justice, and human rights and freedom. The total number of people participating in all the dialogue sessions was around 180.

The initiative of drafting an executive program for UN Resolution 2254 that represents the Syrian point of view.

Given the fact that Syrians are compelled to find a solution for their problems on their own, especially after the failure of the international community to resolve the Syrian conflict, in 2021 the Harmoon Center launched an initiative for drafting a detailed executive program for UN Resolution 2254.

The executive program will consist of a draft document a few pages long, containing a summary of a solution, drafted by about one hundred Syrian figures. Added to this will be a more detailed document that sets out answers to questions and challenges that will confront the implementation of any real political solution, and provide an objective vision for the future. The draft will be discussed over the course of several workshops held in a number of capitals which are currently active on the Syrian issue, and will be promoted as representing a Syrian point of view. The final draft will be translated into English, and perhaps other languages, and will be circulated widely to decision-makers and political influencers.

In order to provide a deeper understanding of the policies of various states towards Syria, especially after the Syrian issue became internationalised, the Harmoon Center held workshops in the capitals of the main countries involved in the Syrian issue, which were attended by academics, politicians and journalists, as well as Syrian professionals residing in those states. The main goal was to discuss the policies adopted by the various states towards Syria, and the possibility of reaching a political solution in Syria in accordance with Security Council Resolutions, based on a peaceful political transition, notwithstanding the interests of the other states.

In this context, a workshop was held by the Centre in cooperation with the Center for Gulf Studies at Qatar University, entitled “The Role of the Gulf States in the Conflict in Syria,” in which researchers and academics from the Gulf states, Turkey, Iran, Russia, Germany, France, China, Britain and the United States, discussed the positions of the Gulf states (the GCC countries plus Iraq and Yemen) on the conflict in Syria. The workshop resulted in an executive summary, which was published in both Arabic and English on the Harmoon Center’s website.

In mid-October 2021, the center reopened the Harmoon Cultural Forum in Istanbul, after its closure for almost a year and a half due to the preventive measures imposed by the coronavirus pandemic. The forum program included one seminar a week on Syrian, Arab and regional issues, in addition to various other art and cultural activities, such as poetry evenings, book signings, and art exhibitions. The Center also relaunched a training section, and reading corner, which includes more than 1,500 titles ranging from politics and economics to literature and philosophy. The forum was able to attract Turkish and Arab cultural figures to contribute to its activities.

The Center also established a cultural forum in the seminar hall at its office in Doha, set up as the Harmoon Cultural Forum in Doha, with the aim of expanding its activities and attracting a larger number of members from the Syrian and Arab community.

Another notable event was the workshop in Doha on the occasion of the tenth anniversary of the Syrian revolution, entitled “Reviews of the Syrian Revolution,” in which 21 researchers from both genders participated. The participants expressed their views on various issues regarding Syria, from social, economic, military and security perspectives, as well as humanitarian issues, such as the issue of asylum, displacement, reconstruction, and the return of refugees. Four Syrians, known for their outstanding contribution to the Syrian revolution, were honored at the workshop, namely Sheikh Ahmed Al-Sayasneh, Dr. Khaled Al-Hindawi, human rights activist Fadel Abdul Ghani, and the activist Marwa Al-Ghamyan.

As part of the Syrian Civil Society Support Program, Harmoon Center sponsored the first conference of the Syrian Students Union, which was held on April 11, 2021, in the presence of a large number of representatives of Syrian student groups elected in universities around the world. The end of the Conference saw the election of the union’s governing Council and administrative, supervisory and advisory bodies that manage the union’s affairs, and further the interests of Syrian students who are scattered all over the world.

In 2022, Harmoon Center looks forward to making additional efforts to reach a higher level of professionalism and to develop its research outputs. The Centre hopes to affect the Syrian cause in a positive way and create better prospects for a political solution.

Harmoon Center is an independent nonprofit research institution, focusing on the production of political, social and intellectual studies and research, particularly related to the Syrian issue, and examines possible outcomes of the ongoing conflict in Syria. The center is concerned with bolstering civil society and democratic awareness. The Harmoon Center also works on Arab issues and related conflicts, as well as Arab regional and international relations.
The Center undertakes projects, activities, and initiatives in order to build Syria’s future foundations on the principles of democracy, freedom, equality, human rights, and equal citizenship rights. The Harmoon Center strives to become a platform for constructive dialogue and an arena for the exchange of ideas.

To read the full report you can downlaod it from the link below. 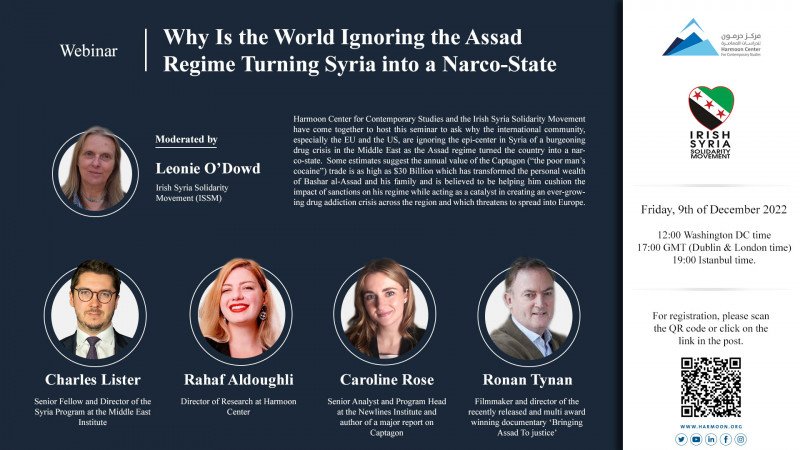 Webinar: Why Is the World Ignoring the Assad Regime Turning Syria into a Narco-State ‘’The Syriacs Past and Present, Their History and Role’’ in the Syrian Journal of Human Sciences, Kalamoon, 18th issue

Webinar: Why Is the World Ignoring the Assad Regime Turning Syria into a Narco-State